“Being from mixed cultures means going through constant waves of doubt”. “Vitiligo” invites you to experience the mindset of two women, both plunged deep in an internal questioning of their external appearance. 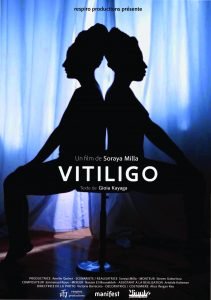 Director
French, with Benin-Cameroonian origins, Soraya Milla grew up between France and Ivory Coast, and in this cultural interlacing she studied Performing Arts at the University of Paris X, which she completed with a movie director’s formation at the IAD and reinforced by a master of production at INA in Paris.
During her studies, her eyes are already upon society, who constitutes her internal and external identity. Graduated, she directed in 2015 her first short film Exotique, a fable about hair, selected significantly in many international festivals. Soraya Milla moves from territory to territory and her body is the witness and the remainder of her encounters. In 2017, during a trip to the United States in New Orleans, she shot the documentary In Wonderland. It tells the initiatory journey of three Afro-Europeans womans visiting their African American cousins, alternating heat and coldness, shade and light.
In 2018, numerous meetings encourage the artist to explore new narrative and transdisciplinary forms. From this new perspective comes the cine-poem Vitiligo, her latest creation in collaboration with the slam and poet Belgo-Burundian Gioia Kayaga. This hybrid video, mixing performance, cinema, music, poetry, installation, theater and dance is a non-territorialized act. The purpose is to merge the viewer with the condition of the half bred woman. Vitiligo opens several avenues of reflection such as the origins in a globalized world, with the female protagonist trying to keep the balance, while advancing on the fragile thread of a neo-identity. It’s a subtle wink that is always addressed to us in her repertoire.