For Sarra, a young middle class girl from Tunis, everything, on the surface, is going as her mother planned: she is taking sewing lessons and she is soon going to get married to a good boy. But Sarra is hiding a dangerous plan with which she wishes to escape her current life. 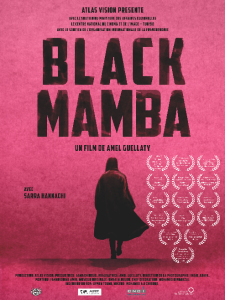 Director
Amel is a Tunisian photographer and director. After co-directing a short documentary, she makes, in 2017, her first professional short fiction, Black Mamba, which wins the Best Short Film award at FESPACO, the Grand prize, Best fiction and Best actress awards at Rencontres du Film Court in Madagascar, the Best short film award at Sochi International Film Festival, the Audience Award at Films Femmes Méditerranée Festival and at Angers Cinémas d’Afrique, the Jury award at Malmö Arab Film Festival… The film is also broadcasted on Canal +.
Her second short fiction, Just like boys! is in post-production and she is currently developing her first feature project, Tunis-Djerba.